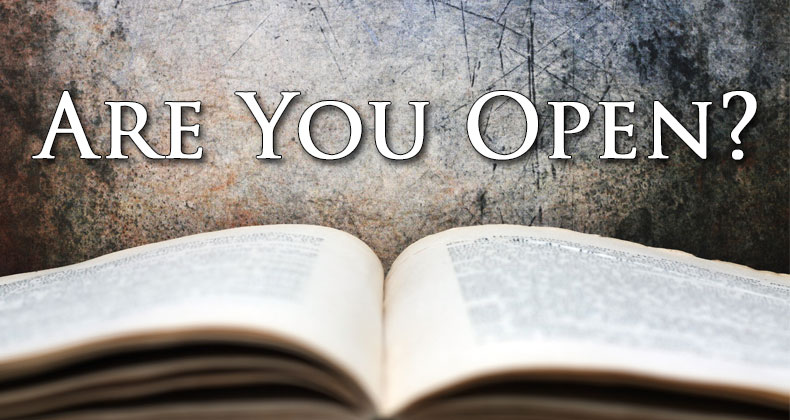 Father, we pray that you would open the flood gates of heaven and pour out Your wisdom. Let it flood our soul this morning so that we would know and declare the power of Your name, Amen. Has anyone ever shared an idea or a dream with you and asked you to have an open mind about it? A life of faith requires the same thinking, are you open?

32 And they bring unto him one that was deaf, and had an impediment in his speech; and they beseech him to put his hand upon him.
The crowd brought Jesus a deaf man that didn’t speak very well, they were expecting him to lay hands on him.

34 And looking up to heaven, he sighed, and saith unto him, Ephphatha, that is, Be opened.
Jesus than looked into heaven, and sighed as though His heart was broken and said Ephphatha…Be opened.

Why did the crowd bring the deaf man to Jesus? Was their heart broken over the fact that he couldn’t hear? Did they know his name or was he known only as the deaf man? Maybe they thought the deaf man deserved his disability? What was the response from Jesus? He didn’t entertain the crowd, instead he pulled the man aside and had a personal experience with him alone. I believe in that moment Jesus silenced every one of the critics, starting with the deaf man himself. Aren’t we our own worst critic? And when we’re consumed with critical thoughts, can we really hear anything else? I believe until we have our own personal experience with Jesus Christ we tend to hear everything else before we can hear him. You see it’s not that we’re literally deaf, we are deaf spiritually which is to say we can’t HEAR heaven. Jesus opened heaven, you know heaven has a voice, right?

[Rev 21:3 KJV] 3 And I heard a great voice out of heaven saying, Behold, the tabernacle of God [is] with men, and he will dwell with them, and they shall be his people, and God himself shall be with them, [and be] their God. The bible makes reference over 60 times regarding the voice from heaven, and where is God? With mankind…us…we are His tabernacle. Will we listen to the voice of heaven or the crowd? What’s the crowd got say?

[Eze 7:11 NIV] Noise has arisen, a rod to punish the wicked. None of the people will be left, none of that crowd–none of their wealth, nothing of value. News flash…don’t bother with the noise of the crowd…God’s gonna lift up His rod to correct the crowd eventually anyway. Why? The crowd makes a lot of noise, they say you have to do this or you must do that…they say this is important and that’s not, but did you notice how much of the crowd will be left? NONE!!! Why? They’re NOT wealthy and they have NOTHING of value…translation…a life without FAITH! Let’s be honest, if you were to tell someone that God talks to you and you’re gonna listen to Him and not the crowd…they might think you’re crazy, said another way they might not believe what they’re hearing…maybe that’s just like the deaf man, they can hear the crowd better
than they can hear you. Let’s test out that belief, how are your ears of faith?

[Rev 2:7 KJV] 7 He that hath an ear, let him hear what the Spirit saith unto the churches; To him that overcometh will I give to eat of the tree of life, which is in the midst of the paradise of God. If you have ears this morning then you qualify according to the word of God, you want to eat from the tree of LIFE? You gotta overcome the crowd…the criticism…life without faith…listen to God and you’ll silence the critics.

Let’s all be open to faith, In Him Phil