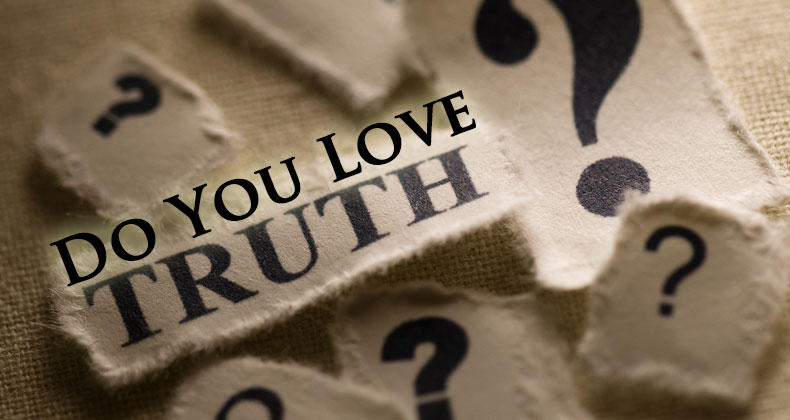 Father, we know that You are the Author of truth, You created it before time began and it will remain long after time is gone. Thank You Lord for sharing Your truth, for giving us the power of Your word to allow us to understand and experience Your love. Transform us today Lord, make us more like You, more like Your word, more like Your son, Amen. You know when I don’t love truth? When I don’t want to hear it. Do you love truth?

2Th 2:8 KJV – And then shall that Wicked be revealed, whom the Lord shall consume with the spirit of his mouth, and shall destroy with the brightness of his coming:
And when that happens this lawless one will be REVEALED not exposed, the Lord will do this by the word He speaks and as His words come to life it will destroy the lawless lifestyle:

2Th 2:10 KJV – And with all deceivableness of unrighteousness in them that perish; because they received not the love of the truth, that they might be saved.
And this lifestyle that holds no truth is not righteous and it causes them to perish; BECAUSE they don’t LOVE God’s word, which is the very thing that will save them.

How does God know if we LOVE truth? And why does God want us to love truth? It’s right there in verse 10…you can’t be saved without it. TRUTH saves us…makes sense, not sure how much a lie is going help anyone? What does Satan do? Could it be the opposite of truth? Lie?

Jhn 8:44 NIV – You belong to your father, the devil, and you want to carry out your father’s desires. He was a murderer from the beginning, not holding to the truth, for there is no truth in him. When he lies, he speaks his native language, for he is a liar and the father of lies. Satan is the father of lies, that means all lies originate from him. Which means there must be a Father of truth, right?

Jhn 1:14 KJV – And the Word was made flesh, and dwelt among us, and we beheld his glory, the glory as of the only begotten of the Father, full of grace and truth. Fair to say if you love truth then you love the Father…GOD! So, let’s say I lie or I believe something that isn’t truth, can that come from God? Of course not, the verse does say God is FULL of truth…full is full, that leaves no room for lies in His house. And look at verse 8 the wicked man is REVEALED, that words means from within…not the one you think is revealed in someone else, that’s exposed NOT revealed. And the bible says that wicked one that lies and causes all kinds of havoc in my life was taken out of the WAY. Hmm, didn’t Jesus say He was the WAY? The truth? Call me crazy but maybe the WAY and TRUTH go hand in hand. And if we go back the verse in John
God was also FULL of grace…grace and truth. So, how do we get grace?

Jhn 1:16 KJV – And of his fulness have all we received, and grace for grace. You already have it, how? Worked for it? Earned it? NOPE, we RECEIVED it…God in His infinite love and wisdom just GAVE it to us because that what God does, He gives…He GAVE His son…He GAVE 5 talents…He GAVE oil…He GAVE knowledge…He GAVE manna…He GAVE the increase…obviously I could keep going but the point here is, that God is by nature a GIVER, so wouldn’t He give us what we need most?
SALVATION!!

Psa 3:8 KJV – Salvation belongeth unto the LORD: thy blessing is upon thy people. Again, call me crazy but if salvation itself BELONGS to God then isn’t He really the only One that can give it? And isn’t that why I need truth and grace? Grace is God’s nature which produces salvation and us believing that is our truth. This is why we perish, we don’t believe that the love of God saves us…can’t earn it and can’t lose it, otherwise that would become just a part or piece and NOT His fullness…we get the full measure of God…I know that’s kind of hard to grasp, but that’s why it’s called faith…it’s supernatural! So, who is the lawless one that is deceived? It’s me when I don’t love truth. Again, how do you know if I love truth? I ignore it? I pretend it doesn’t exist? I bend to serve my purpose? Yeah that probably doesn’t sound like  something was taken out of the WAY, sounds like it the law is missing from my life. How do we get it back?

Jas 2:8 NKJV – If you really fulfill the royal law according to the Scripture, “You shall love your neighbor as yourself,” you do well. His law boils down to one thing…LOVE…the One who wrote the book summed it up with one act…that is the truth we love.

Is it time for truth? Jer 33:6 NLT – “Nevertheless, the time will come when I will heal Jerusalem’s wounds and give it prosperity with truth and peace. It’s time…we can’t be healed without truth and peace.