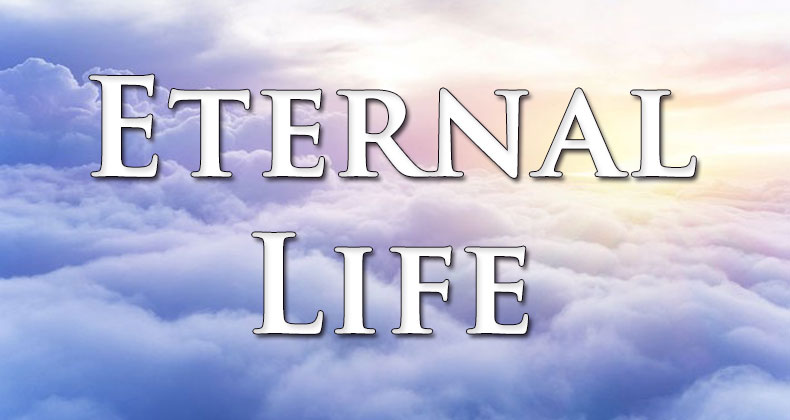 Father, we know that You are moving and shaking our kingdoms so the only one that remains is Yours. We seek You Lord, for Your truth and Your revelation that we might have a greater understanding of the life You have chosen for us to live, Amen. What is eternal life?

10 He that believeth on the Son of God hath the witness in himself: he that believeth not God hath made him a liar; because he believeth not the record that God gave of his Son.
And when you believe in Jesus Christ we have that witness within us: but when we don’t believe we live a lie; because we believe not that which Christ has accomplished through the cross.

12 He that hath the Son hath life; [and] he that hath not the Son of God hath not life.
He that lives as the Son has life; and if NOT as Christ you don’t have life.

Of course eternal life can be a controversial topic and there have been many messages preached regarding how to get it or God forbid lose it. But I don’t believe God’s word or His promises are controversial, you know why? He’s God, why would He create controversy? To try and confuse us? He’s looking for a debate? Ha! He speaks and light appears, He blows and seas are divided, He laughs and mountains crumble. We create the controversy because we find it hard to accept His level of mercy and grace…yeah, it reaches the heavens. I hope we can see it this morning, in this passage God says He’s GIVEN us eternal life. Which means it’s a gift that doesn’t require performance on our part, not even a prayer. You want more proof Thomas?

[Tit 1:2 KJV] In hope of eternal life, which God, that cannot lie, promised before the world began. Before you and I did a thing, before our many screw ups in life….God’s plan to give us eternal life was PROMISED before the creation of the world. Now if He can’t lie, that means when He makes a promise…He still keeps it even when I reject Him, He doesn’t retaliate and take it away…why do you think He tells you His witness is greater than man? So what is eternal life? We die we all go to heaven and live in eternity with God? Okay, but maybe it’s more than that. Eternal life means it has no beginning and it has no end. So if it has NO beginning and He has already given it to us and if we had to die to get it then that would fail its definition because we have created a beginning when we die. Yeah maybe it’s bigger than what we once believed?

[Rom 15:7 KJV] Wherefore receive ye one another, as Christ also received us to the glory of God. When we receive one another (be a friend) just as Christ, by this we give God glory. It’s the opposite of rejection, why do we reject people? [Pro 19:11 NASB20] A person’s discretion makes him slow to anger, and it is glory to overlook an offense. We’re not willing to give God glory by
overlooking the offense, instead we choose to reject the person that has offended us. Who should we honour?

[1Pe 2:17 NASB20] Honor all people, love the brotherhood, fear God, honor the king. We honor the King when you and I honor ALL people, yeah even those that choose to reject us. It’s big one but remember this is eternal life, it has no beginning and no end…we are to keep on keeping on. When we don’t honor others it’s a selfish act which is actually death spiritually, it pulls us away from God instead of drawing closer to him…and remember God is greater, I have to see Him greater than I see myself because I’m the one to blame NOT others.

[Phl 2:3 CSB] Do nothing out of selfish ambition or conceit, but in humility consider others as more important than yourselves. What I’m saying is just CONSIDER it, God might know what He’s talking about. Now that we’ve glorified God and honored man we get immortality, which means a life that cannot fail or die (that’s the definition). What doesn’t fail?

[Luk 22:32 KJV] But I have prayed for thee, that thy faith fail not: and when thou art converted, strengthen thy brethren. Living a life of FAITH cannot fail, why else would Jesus pray that prayer?
You want to be immortal today, quit listening to man and start listening to God…it will defy reason and logic because His witness is greater, it reaches beyond all logic…the only way to heaven.

The very last chapter of the bible speaks about a river flowing from heaven, could that be eternal life? [Jhn 7:38 KJV] He that believeth on me, as the scripture hath said, out of his belly shall
flow rivers of living water. I pray the only things that flows from our life is glory, honor and immortality…believe it.

Let’s all live eternal life, In Him Phil