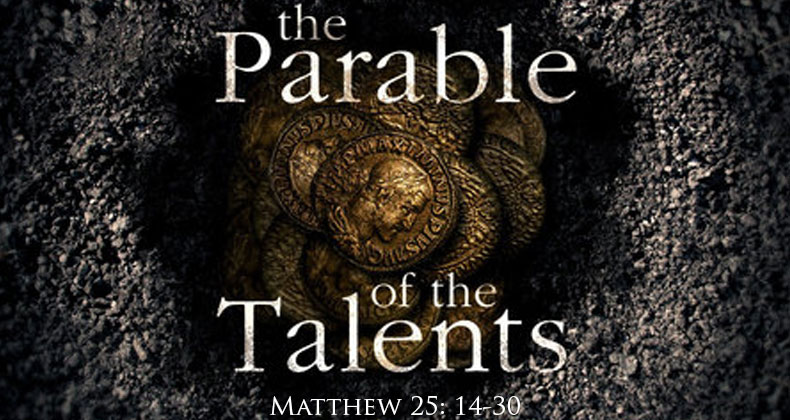 Good morning all! Father, we know that You alone equip us to live this life by Your power and grace. Thank You Lord for all the gifts You’ve given us, for the beauty of Your presence and for the talent that You’ve placed deep inside us, Amen. Have you ever watched that show, America’s got talent? What about God? Does He have talent? Got talent?

Mat 25:14 KJV – For the kingdom of heaven is as a man traveling into a far country, who called his own servants, and delivered unto them his goods.
The kingdom of heaven IS the Christ man that traveled from heaven to earth, He called us His servants and gave us what He had which was good.

Mat 25:15 KJV – And unto one he gave five talents, to another two, and to another one; to every man according to his several ability; and straightway took his journey.
One of His servants received 5 talents, another 2 and another 1, each based on their own ability; then He went on His journey.

Mat 25:23 KJV – His lord said unto him, Well done, good and faithful servant; thou hast been faithful over a few things, I will make thee ruler over many things: enter thou into the joy of thy lord.
Now to some that had talents they returned more than He gave them, He called them GOOD and FAITHFUL, they would now be ruler over much more and they would also go where there Lord goes.

Mat 25:26 KJV – His lord answered and said unto him, Thou wicked and slothful servant, thou knewest that I reap where I sowed not, and gather where I have not strawed:
The Lord said, you are wicked and lazy, you know I reap and gather but you did nothing.

As I have read through scripture, I can’t find anywhere where Jesus (the man that traveled to a far country) gave any of His disciples money. If fact, when He was told to pay the town tax He couldn’t because He had no money so He sent Peter to go fishing and told him he’d find the coins in the mouth of the fish and to go pay the tax. How about that for dead broke? And it says He CALLED His servants, they were appointed by Him which is why He gave them goods…He equipped them to do what He called them to do.

Jhn 15:16 NIV – You did not choose me, but I chose you and appointed you so that you might go and bear fruit–fruit that will last–and so that whatever you ask in my name the Father will give you. This is my command: Love each other. Your talent…is the ability to love others, it’s got nothing to do with money. I know we think if we’re good with money that makes us good stewards, but when I look at the life of Jesus He had NO money. So, was He a bad steward? Of course not that’s ridiculous, He was the greatest steward known to mankind. The parable of the talents is all about the ability He’s given to you and I to LOVE and FORGIVE others…that’s your talent. You see, it’s one thing to say I love you, it’s a completely different kind of love to say I forgive you. He says you and I should GO and bear the fruit (fruit, talent same thing) that means we go and bring it, we don’t wait for it. Have you ever waited to bear the fruit? It might have sounded something like…when they come crawling back on their hands and knees or when hell freezes over or over my dead body. Well in that case your fruit didn’t LAST, your love lasted long enough for you to get angry but now you’re not going to forgive them. Seriously can we say we love and then not forgive? I believe this is represented by the servant given 5 & 2 talents, seven is the number of perfection and there is no such thing as perfect love without forgiveness. Now, when we hide the talent in the earth that means you can’t see it. Now, why did the servant hide it in the first place?

Mat 25:24 KJV – Then he which had received the one talent came and said, Lord, I knew thee that thou art an hard man…He thought God was a HARD man, the Greek definition of the word is hard, harsh, rough, stiff…everything God is not. We think God is judgmental and critical expecting paybacks for all the wrongs we’ve done, but if that were the case why did He come and give us the talent in the first place?

Rom 2:4 NLT – Don’t you see how wonderfully kind, tolerant, and patient God is with you? Does this mean nothing to you? Can’t you see that his kindness is intended to turn you from your sin? His kindness is what causes us to change the way we live, there isn’t one hard bone in His body. Did Jesus hide his love for us? Again, based on the word of God my Bible says He loved me and forgave me and it goes beyond a me mentality it was the world. We hide our talent in the earth when we don’t love and forgive and when we do that it makes us wicked and lazy. Why does God think we’re lazy?

Pro 15:19 NLT – A lazy person’s way is blocked with briers, but the path of the upright is an open highway. The lazy person’s WAY of life is blocked by briers, thorns…curses…might sound like I can’t stand you or get away from me BUT the upright is an “OPEN highway” as in a higher way of living with an “OPEN heart” that doesn’t curse people…sounds like talent to me. You got talent so don’t hide it, GO love and forgive and you’ll hear God say Well done good and faithful servant.

Why do we think God is hard on us? Pro 13:15 KJV – Good understanding giveth favour: but the way of transgressors is hard. We really don’t understand His Grace when we do we give grace to others, if not, we live just like a sinner who comes down hard on folks.

Let’s all show off our talent, In Him Phil