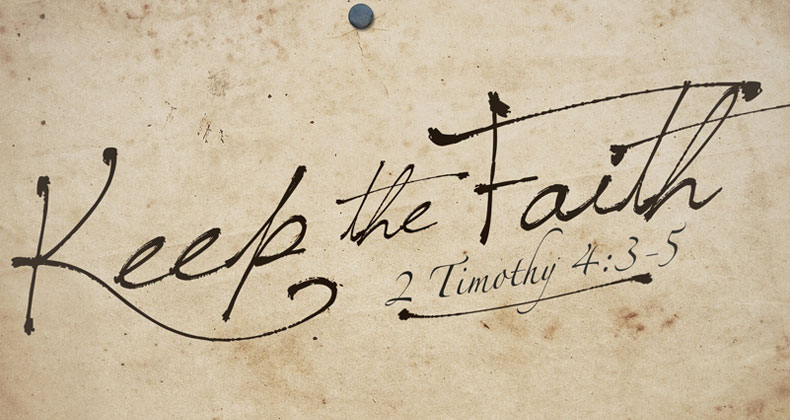 Father, we know according to Your word it is impossible to please You without living by faith. Lord we know that You have placed faith inside of us, help us to find it, live by it and keep it always, Amen. Have you ever heard the expression keep the faith? Which is to say don’t give up on God, no matter what you may face.

3 For the time will come when they will not endure sound doctrine; but after their own lusts shall they heap to themselves teachers, having itching ears;
A time comes and we don’t endure what is faithful and true, instead we want to satisfy our feeling, so we heap up as much advice possible until we hear what we want.

4 And they shall turn away [their] ears from the truth and shall be turned unto fables.
We turn away from God’s truth and trade it for some feel good idea that won’t last and ends up being a fable instead.

5 But watch thou in all things, endure afflictions, do the work of an evangelist, make full proof of thy ministry.
BUT watch in every arear of your life, endure affliction, and touch lives outside your family and church and do it in such a way so that you will represent the gospel of our Lord and Savior Jesus Christ.

Paul is writing his final letter here as he’s sitting in a Roman prison, likely awaiting his execution. It’s written to his disciple Timothy to encourage him to pick up the mantel and keep on keeping on. One of the first things he tells him is to NOT have itching ears, which is the same thing as NOT looking for folks to tell is what we want to hear. Why do suppose that might be a problem?

[Isa 33:15 KJV] He that walketh righteously, and speaketh uprightly; he that despiseth the gain of oppressions, that shaketh his hands from holding of bribes, that stoppeth his ears from hearing of blood, and shutteth his eyes from seeing evil. How do you stop your ears from hearing blood? You hear a whisper in one ear saying you don’t have to forgive, and God whispers in the other and says yes you do, when you forgive you stop hearing blood. And how many things did Paul tell him to watch out for? ALL…same as every area of our life. Why?

[Gen 4:7 NIV] 7 If you do what is right, will you not be accepted? But if you do not do what is right, sin is crouching at your door; it desires to have you, but you must rule over it. What do you suppose we are to rule over? Our EMOTIONS, what sin do you think is hiding behind the door of your heart? God says do what is RIGHT and you will be accepted by Him, doing what is right is to LIVE by faith. This is the message Paul is sharing this morning with us. I always feel if folks have a certain amount of experience, then they’re usually somewhat educated to talk about. I hope you can see the picture this morning, Paul says he has KEPT the faith…he tells us this as he’s sitting in jail. Is that the first thing we think of if someone is sitting in jail? They kept faith? I usually think they’re guilty-Ha! Didn’t Paul get put in jail before? He got beat up on three different occasions, in fact, he was shipwrecked at sea for a night and a day according to scripture. I believe this is what’s referred to as a GOOD fight, a struggle. Which is to say living a life of faith is kind of messy in a way and if you’re like me, I find comfort in that…cause everybody has some kind of mess they dealing with, right? And with mess and all, how else do we keep the faith? RUN…that’s right ain’t no lollygagging, when you have something of true value it should be met with passion and conviction. Are we running?

[Gal 5:7 KJV] Ye did run well; who did hinder you that ye should not obey the truth? Running = obedience to God’s word. What’s stops any of us from obeying the voice of God? And let’s not get too holy and confuse what his voice sounds like. It’s sounds like love…it sounds like forgiveness…it sounds like long-suffering. Do you like that sound of that? I hope so because that’s the RACE we’re running, let those qualities be seen first in our life with each other and not the last and God forbid not seen at all. To keep the faith is to trust God trough ALL things and RUN to obey His truth and when you do that you will receive His crown.

What’s it worth? [1Pe 1:7 NLT] These trials will show that your faith is genuine. It is being tested as fire tests and purifies gold–though your faith is far more precious than mere gold. So, when your faith remains strong through many trials, it will bring you much praise and glory and honor on the day when Jesus Christ is revealed to the whole world. Our faith is worth more than all the money in the world, so make sure you keep it.

Let’s all keep the faith, In Him Phil