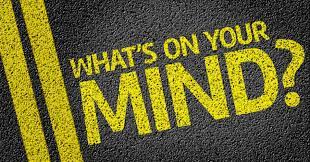 Father, we know according to scripture Your thoughts of us exceed the sand on all the beaches. We pray our thoughts are of You and one another, that we would see Your love and favor in our life, Amen.

Mar 5:14 KJV – And they that fed the swine fled, and told [it] in the city, and in the country. And they went out to see what it was that was done.
And those that had a job feeding swine ran and told everyone in that COUNTRY. And everyone followed to see what happened.

Mar 5:16 KJV – And they that saw [it] told them how it befell to him that was possessed with the devil, and [also] concerning the swine.
And those that saw what happened continued their story and told of the man, and also their real CONCERN the swine they tended were killed and so they had NO more lively hood.

Mar 5:17 KJV – And they began to pray him to depart out of their coasts.
So all the folks that lost their jobs prayed since they were such good Christians, they prayed that Jesus would please leave their city.

Mar 5:18 KJV – And when he was come into the ship, he that had been possessed with the devil prayed him that he might be with him.
So, when Jesus answers their pray and leaves, the man that had been set free prayed if he could STAY with Jesus.

Why did these Christians pray for Jesus to leave, while the one that was rejected ask if he could stay with Him? Or perhaps better question to ask is why would they pray Jesus leave ever? I mean after all he just healed the man that was tormented…surely that’s a good thing? Or maybe the reason for the prayer was because Jesus got rid of all the swine, it would appear that’s how these folks made a living. So, NO swine…NO money. 99% of the time it boils down to the almighty dollar over the Almighty Jesus. Now call me crazy but I seem to remember scripture declares My sheep know My name NOT My pigs. Truth is the swine were declared unclean and they shouldn’t have anything to do with them anyway. But maybe times were tough and they needed to make a buck and instead of waiting on God to make a way they chose…well they made less than desirable choice. So we’re clear this is symbolism, pigs don’t make us unclean…God told Peter to kill and eat so we’re speaking spiritually here. Should we desire anything that’s placed in front of us? Shouldn’t we show some discretion for the things of God, like righteousness, peace and joy? I see the pigs representing a mixture of things we hunger and desire, I mean they’ll eat what’s clean but the truth is they’ll eat what’s unclean as well. Have you ever pursued something you thought would satisfy you only to feel a hole inside anyway? It’s kind of like to story of the Prodigal son, I mean he had it all and life was good. And what happened? I think he pursued selfish thoughts or perhaps he thought his dad was too strict and didn’t want to follow his rules. You remember how that played out for him?

Luk 15:15 KJV – And he went and joined himself to a citizen of that country; and he sent him into his fields to feed swine. What do you know, feeding swine as well in “that COUNTRY”. What country? The U.S.? China? Russia? Oh, Israel?

1Jo 2:15 NIV – Do not love the world or anything in the world. If anyone loves the world, love for the Father is not in them. Looks like the country is the WORLD, it worldly thinking instead of living by faith, it’s the wrong pursuits with the wrong thoughts. Now nobody actually prays for Jesus to depart, we do it with our lifestyle loving worldly ideas and pursuits over God. We do it by rejecting people just like those in the city, we do it by caring about money rather than healing a relationship. Remember the man that prayed he would stay with Jesus, scripture says he was in his RIGHT mind. Remember that slogan growing up, “the mind is a terrible thing to waste”…let’s all pray we stay with Jesus and keep our right mind.

Are you in your RIGHT mind? Isa 26:3 KJV – Thou wilt keep [him] in perfect peace, [whose] mind [is] stayed [on thee]: because he trusteth in thee. We can have PERFECT peace, all we have to do is ignore the swine and trust God.

Are You Sure?
03/12/2021
Search
Categories
Recent Posts
Archives
Go to Top