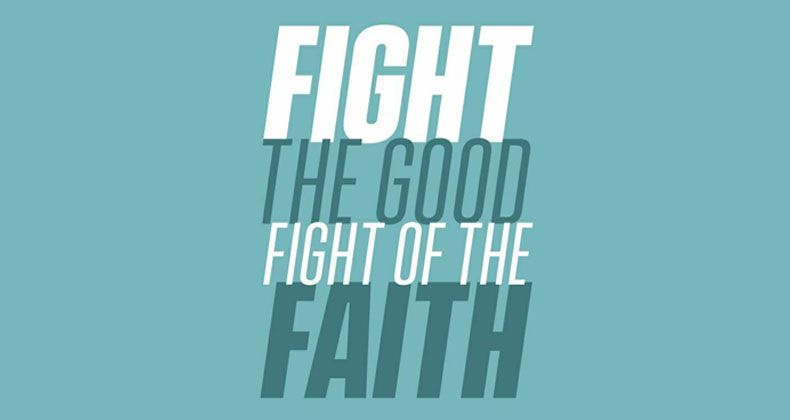 Good morning all! Father, thank You for leaving the ninety nine to come after me. Thank You for creating me, loving me, believing in me and fighting for me. Lord, fill my heart with the same passion and conviction for You as You have shown for us, Amen. How bout that question? Do you fight? Only one answer there, but of course. We fight everyday of our lives over many things, some good and some not so good, but do you what’s the right fight?

1Ti 6:8 KJV – And having food and raiment let us be therewith content.
When we have something to wear and something to eat we should be content.

1Ti 6:9 KJV – But they that will be rich fall into temptation and a snare, and into many foolish and hurtful lusts, which drown men in destruction and perdition.
But it’s the opposite when you’re NOT content, you fall into trials and traps which bring about MANY foolish and harmful desires that cause you to drown and self-destruct.

1Ti 6:10 KJV – For the love of money is the root of all evil: which while some coveted after, they have erred from the faith, and pierced themselves through with many sorrows.
The pursuit of money is at the root of ALL that is evil; and when we pursue it, we stray from our faith and our soul ends up with MANY sorrows and pain.

1Ti 6:11 KJV – But thou, O man of God, flee these things; and follow after righteousness, godliness, faith, love, patience, meekness.
But not you man of God, who flee from that pursuit so you can go HARD after living right, serving God, having faith, loving all, being patient in tough times and humble when it happens.

1Ti 6:12 KJV – Fight the good fight of faith, lay hold on eternal life, whereunto thou art also called, and hast professed a good profession before many witnesses.
This is considered the right fight for faith in which eternal life will be found, which we have been called and we acknowledge our true purpose to MANY that see how we live.

I believe fighting is perhaps the purest form of faith, it goes hand in hand with eternal life. And when I ask how many want eternal life? The response is usually 100% affirmative. Where does the right fight come from anyway?

Psa 24:8 KJV – Who is this King of glory? The LORD strong and mighty, the LORD mighty in battle. Here’s how I see it this morning, God sees you across the crowded dance floor and He locks His sights on you and powers His way through the crowd just to get to you, you know why? He believes your worth fighting for! This is really the message Paul has to for Timothy, when we fight for anything else but faith…you got the wrong fight. Why do we fight for anything else besides faith?

1Ti 6:4 NIV – They are conceited and understand nothing. They have an unhealthy interest in controversies and quarrels about words that result in envy, strife, malicious talk, evil suspicions. Paul told us what the problem was in the beginning, we don’t UNDERSTAND God and we’d rather argue and fight with others, speak poorly of them and think the worst of them…the wrong fight. Think about it, does that sound like faith to you? Money isn’t the problem, it’s my selfish pursuit which usually comes at the expense of living by faith. What should we fight for? Righteousness, love, faith, patience and humility. Now God doesn’t randomly put these characteristics together, they provide the path that we live our life by which leads to eternal life. First, and foremost we should always do the right thing and what is that?

Phl 2:3 NIV – Do nothing out of selfish ambition or vain conceit. Rather, in humility value others above yourselves. Do NOTHING out of a selfish position…I know we think others may not deserve to be valued beyond us but maybe God don’t care what we think and instead wants to see if we’ll go hard after Him like He does us…isn’t that the model…the cross…you came before Him…that’s called righteousness. Faith, that’s when we realize we should be a witness to MANY and they will see us live by faith…not just the folks we like. Love, this one will take a life time to truly live out, remember love is the fulfilment of the law. If we have to ask God who our neighbor is? You don’t really know God yet, love FIRST ask questions later. Patience, we will have to endure some stuff in life and that doesn’t mean we now have the right to pursue a fight other than faith. Patience says I will endure the hardship and by faith love anyway, my Bible says God is longsuffering. How long? He’s got one measurement of time…it’s called eternity…keep fighting. The last one is humility, and who was the most meek man in the bible?

Num 12:3 KJV – (Now the man Moses was very meek, above all the men which were upon the face of the earth.) What a great way to close with the character of meekness, it’s definitely the oxymoron when you think about fighting but here’s why? Moses was not being held captive by pharaoh, Israel was and yet he fought long and hard until they were released. After they get released, He goes up the mountain to talk with God while they reject God and worship the golden calve. God of course doesn’t approve and Moses steps in and says it’s my fault spare them. They complained about God’s provision at every turn and Moses again steps in and asked God for something more on their behalf. They fought battle after battle and Moses always stepped in and pleaded with God on behalf of the people for the victory, and this all happening while in pursuit of the promise land. And the best for last, Moses gets them there but he didn’t get to go in and they did…this is the perfect picture of the good fight of faith…until the end we fight to put others ahead of ourselves…the right fight.

Who’s in your corner? Psa 144:1 KJV – [[A Psalm of David.]] Blessed be the LORD my strength, which teacheth my hands to war, and my fingers to fight: We have the greatest boxing Coach in our corner, He gives us hands of faith and fingers of forgiveness…guaranteed knock-out!

Let’s all fight the good fight, In Him Phil