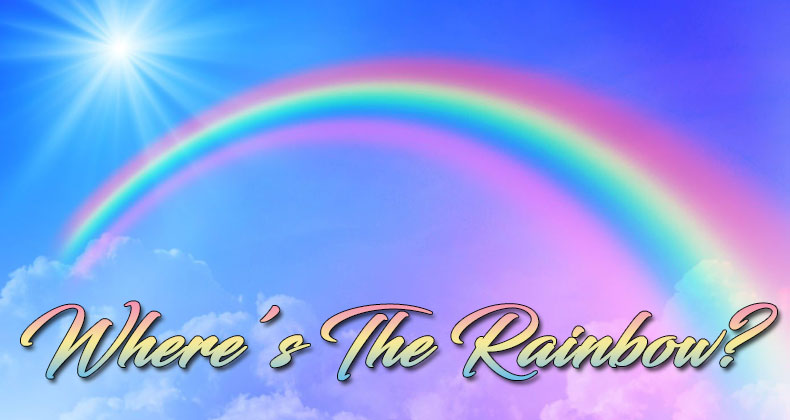 Father, we know that storms will come and go in life, but You will not. You never leave us or forsake us; we are Your prized possessions above all else. Thank You Lord for bringing the storm and thank you for causing it to end, we know Your love endures forever, Amen. Something truly majestic about a rainbow, they’re rare but they always seem to produce the wow factor when we see it. Where’s the rainbow?

1 And I saw another mighty angel come down from heaven, clothed with a cloud: and a rainbow [was] upon his head, and his face [was] as it were the sun, and his feet as pillars of fire:
And I saw a mighty angel that came down from heaven, His name of course Jesus Christ, He wore a cloud; a rainbow sat on His head, His face shone as the sun and His lifestyle was a pillar of fire that would not crumble.

2 And he had in his hand a little book open: and he set his right foot upon the sea, and [his] left [foot] on the earth,
He has this humble little book that gave Him the power to stand on the sea and the earth as if to say they can’t influence how I live my life, I’m above that.

3 And cried with a loud voice, as [when] a lion roareth: and when he had cried, seven thunders uttered their voices.
At the same time, He roared like a lion in total victory, it would appear he spoke about 7 things…must be important.

We spoke about this in church a couple of weeks ago, can you see the rainbow? I hope you can because that means the storm is over. The rainbow is also a sign of God’s promise, like maybe He knew the storm wasn’t going to last forever. Now where do we find storms? The sea and the earth, why do you think He’s standing on them both? You can’t actually stand on a sea so what are we standing on? Your emotions. Remember the storm at sea with His disciples?

[Mar 4:38 NKJV] But He was in the stern, asleep on a pillow. And they awoke Him and said to Him, “Teacher, do You not care that we are perishing? Were they really going to die? Or was it just how they FELT? As long as we let our emotions rule our life we’ll never live in victory. Yes, I know we all have emotions, but they shouldn’t keep us from following God’s word. Man shall NOT live on bread alone, but EVERY word that comes from the mouth of God. Isn’t that true? Our feelings will usually tell us the opposite of what God tells us. Real life example, some days I don’t FEEL like going to the gym after work, I go anyway…living in victory. You know when we change? When staying the same is more painful than going to the gym…my emotions or God’s word. And why do we stand on the earth?

[Dan 4:26 KJV] And whereas they commanded to leave the stump of the tree roots; thy kingdom shall be sure unto thee, after that thou shalt have known that the heavens do rule. If you want a SURE kingdom then the EARTH should be under your feet because HEAVEN rules your life…FAITH! What’s wrong with the earth?

[Gen 1:2 KJV] And the earth was without form, and void; and darkness [was] upon the face of the deep. It’s reason and logic, what else would make us ignorant? You and I will come up with a million REASONS why we don’t follow the voice of God, right? It’s not fair, it don’t really matter, He don’t know, He don’t really care, why bother?

[Mar 2:5-6 KJV] 5 When Jesus saw their faith, he said unto the sick of the palsy, Son, thy sins be forgiven thee. 6 But there were certain of the scribes sitting there, and reasoning in their hearts. The scribes thought Jesus was crazy because He forgave the man instead of coming up with a reason to NOT forgive him, Jesus was able to stand upon the earth because heaven ruled His life…faith! A life of faith will always forgive, it doesn’t need a reason instead it looks for the opportunity to hold onto the rainbow…God’s promise. What does God promise? Hmm…maybe the 7 thunders that the Lion roared. You know Jesus is the Lion of Judah, right? What might His roar sound like? Could it be the 7 sayings spoken when He hung upon the cross?

It starts with forgiveness and ends with reconciliation, it’s the only way back to the Father but remember the promise was on His head NOT ours, He fulfilled ALL things so we could live it…victory!

What’s your roar sound like? [Isa 5:30 KJV] And in that day they shall roar against them like the roaring of the sea: and if [one] look unto the land, behold darkness [and] sorrow, and the light is darkened in the heavens thereof. Make sure you roar like a lion and not like a sea, when the sea roars it produces a sound that makes heaven a dark place. What might that sound like? It’s says I don’t forgive you…if the lights are out…means God ain’t home.

Let’s all live like a true lion, In Him Phil